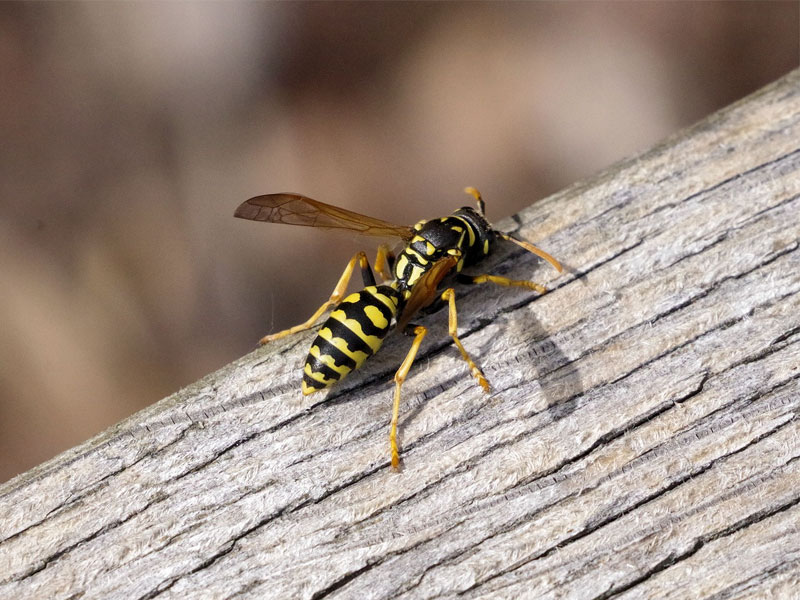 Wasps are flying insects, which may nest anywhere in urban areas and the countryside. Wasps are considered pests because often they are aggressive to people and when they sting it is always painful. In cases of people that are more sensitive to wasp stings, this pest can send you in anaphylaxis – a potentially lethal allergic reaction. Wasps are easily confused with bees and hornets, although wasps have some unique characteristics. In case that you encounter a bee problem you should contact the nearest bee keeper, accredited by the British Bee Keepers Association.

When a wasp infestation occurs you should not try to sort it out yourself unless you have the adequate equipment and you have been properly trained. If you disturb a wasp nest, you had better be protected, otherwise they will swarm and try to sting severely. In case that you cannot handle the problem yourself you should seek professional help from a wasp expert or a pest control company, which will be able to get rid of the wasps quickly and effectively for you.

Wasps are usually more active during the early summer, scouting for suitable places to build their nests. The main factor when making a decision where to nest, is the availability of food and appropriate materials to build the nest. Please note that wasps are attracted to rotten fruits, opened cans with fruit and fruit juices, or other sweet food sources.

Wasps may try to settle indoors or outdoors. The most common places where they would nest are trees, under ledges and roof edges, in wall cavities, attics and balconies. While in cases of indoor wasp infestations the best practice for control is to remove the nest, in most outdoor infestations it is actually better to leave the treated nest, acting as a poisonous trap for any new wasp scouts that may try to use the nest to establish a new infestation.

At Prime Pest Control we offer low-cost wasp removal solutions and nest treatments that are safe for the environment and our health. Our extensively trained and experienced wasp specialists are always at your service, being able to identify the problem and deal with it quickly and efficiently. Wasp infestations may reoccur if the nest has not been treated properly, so we highly recommend that you call a professional pest control company to achieve complete removal of the nest.

Prime Pest Control is a professional company dedicated to protecting residents and businesses from wasp infestations across East, West, South and North London for many years now. Being predators, wasps and their first cousins, the hornets, are aggressive to people and even walking close to their nests may often provoke these insects to sting. This is why in wasp control it is essential that professional treatment of the wasp nest is carried out. What makes them a pest is that while they are hunting for other pest insects, wasps walk and drag their sting in the dirt in different environments and so their sting is not just venomous, but it may also carry dangerous bacteria. Unlike bees, wasps do not die when they sting.

Site risk assessment with regards to a potential wasp entry point. Proofing against wasps and other insects is part of the general best practices in pest control, as well as integrated pest management (IPM) solution.

Successful wasp control requires professional treatment of the nest and a possible removal. The best practices in our experience and on paper say that 48 hours should be allowed after the nest treatment and before the nest removal, so that all scout wasps will return on time to get eradicated. Another effective method of wasp control and extermination would be to leave a nest that has been treated successfully for some time. This is due to the fact that other wasps from nearby nests may come around your property and they will most probably scavenge the abandoned nest, in which case they will get poisoned by the residue that is still inside the nest. So, treated nests act pretty much as wasp traps. Wasp queens, as well, would not use the same nest during the following year and there is nearly a zero-chance of wasps reintroduction in the already abandoned nest.

During the early months of summer, wasp nests are much likely to be new and relatively small in size, whereas by the end of the season the nest will get bigger and the population will have greatly increased. We strongly recommend that you do not try to remove a mature nest unless you have the right gear and proper training. Being predators these insects are often aggressive to people and they will try to sting if you get anywhere near the nest and endanger the population. Our wasp exterminators are thoroughly trained by the British Pest Control Association (BPCA) and will quickly identify the problem, taking the right measures and precautions for the safe eradication of any wasp population. No matter whether it would be your home or a commercial property, Prime Pest Control will provide you with a service that will best meet your needs and requirements, as well as comply with all the legislation related to this pest and the type of your business. 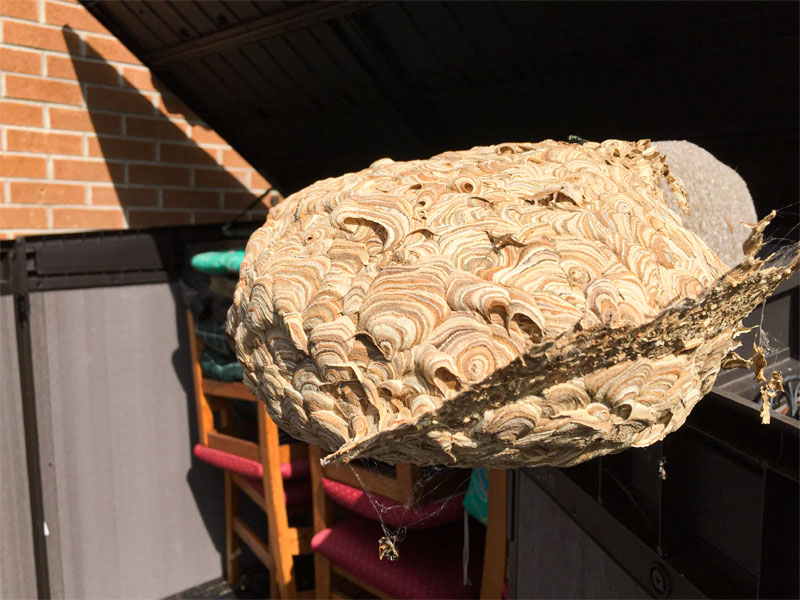 Wasps are flying predatory insects, which prey upon other insects and some wasp species even parasite on their victims by laying eggs inside their bodies. Adult parasitic wasps, nevertheless, get their nutrition from the nectar of plants and flowers, as well as fruit and sugars. For almost each one of the wasp species there is one corresponding pest insect, which is most likely to be their prey. For this reason some parasitic species of wasps are used to serve as a pest control unit to protect crops from pest insects that may cause harm to these plants.

Wasps are aggressive and fearless, so they will try to sting anyone who threatens their population. In cases of people with allergy (which is called anaphylaxis) to their venom, a wasp sting may even lead to lethal consequences. Wasps may be beneficial to the environment but their painful stings and aggressive behaviour have won them a reputation of one of the most unwanted and feared flying pests, along with their cousins – the hornets.

Wasps will hibernate before winter and whoever survives the cold months will become active again during the spring. When the weather warms up and with the help of the wasp scouts, the queen wasp will start looking for a suitable place to build a nest. They usually strip tiny bits of wood and chew it along with wax and saliva, thus making a very good building material for the future nest. The queen wasp is responsible for the control of the nest and for laying eggs, which, in some cases, are being injected into the prey of the parasitic species of wasps.

Wasps mate in the early autumn when the queen wasps are fertilised by the male drones, after which the queens will hibernate and survive throughout the winter. In the following spring the cycle starts all over again and the wasp queens, which have survived the cold months, will start looking for new locations to start a population. The eggs that the wasp queen still carries after hibernation will be laid in the new nest, where as many as 1000 new wasps will hatch and develop the new population. During the summer months, wasp nests are overworking, with up to 300 eggs produced per day and up to 5000 adults feeding the grubs.